1805 Campaign on the Danube

1805 Campaign on the Danube

A group of KS members are fighting this famous campaign which pitched arguably Napoleon's finest army against a mixed force of indifferently led Austrians and Russians in eastern Bavaria during the late autumn and winter of 1805, culminating in December at the battle of Austerlitz and the destruction of the Third Coalition.

We are using Norbsoft's excellent "Scourge of War - Waterloo" (SoWWL) to resolve the battles as online multiplayer games. The base game has been heavily modified by our own "Kriegspiel" Mod. To resolve the strategic moves we are using Frank Hunter's excellent hex-and-counters digital game "Campaigns on the Danube 1805-1809" (CotD) a very tidy and effective piece of software that covers only the operational aspects and which manages troop fatigue, formation cohesion, command control, delayed orders and supply states well, lifting those burdens of administration from the game umpire.

I am acting as umpire and moving the French forces on the map in response to a player team who represent Napoleon and his staff, making this Kriegspiel a committee style game. However when battles require resolution we place the player team always in command of the weaker side, even if that means they play Austrians against their own strategic moves. In both cases the game AI of CotD and SoWLL controls the opposing side.

And so, boots and saddles! We march!

On October 1st the Grand Armee moved across the Rhine on a wide front and advanced generally south east into the northern reaches of Bavaria, aligned on an axis towards Nurnburg and Munich. The Austrian General Mack had moved west deep into Bavaria and secured the city of Ulm astride the Danube where he intended to suppress the Bavarian state and remove her as an ally of France. Here he was obliged to pause as his rapid advance had outrun his supply bases at Munich and Linz. Allied Russian armies of the Third Coalition commanded by Generals Kutusov and Buxhowden were further east in Austria and Bohemia, marching west in support of Mack. Further Austrian reserves were mobilising at Vienna and on the river Inn.

Napoleon had with him six Corps d'Armee; I Corps commanded by Bernadotte, II Corps under Marmont; III Corps led by Davout; IV Corps commanded by Soult; V Corps under Lannes and VI Corps of Ney. Murat led a reserve cavalry corps of cuirassiers, carabiniers and dragoons. Further west Augerau was bringing up the smaller VII Corps which had acted as security at the Rhine crossings while Berthier was also moving east with the Imperial Guard. 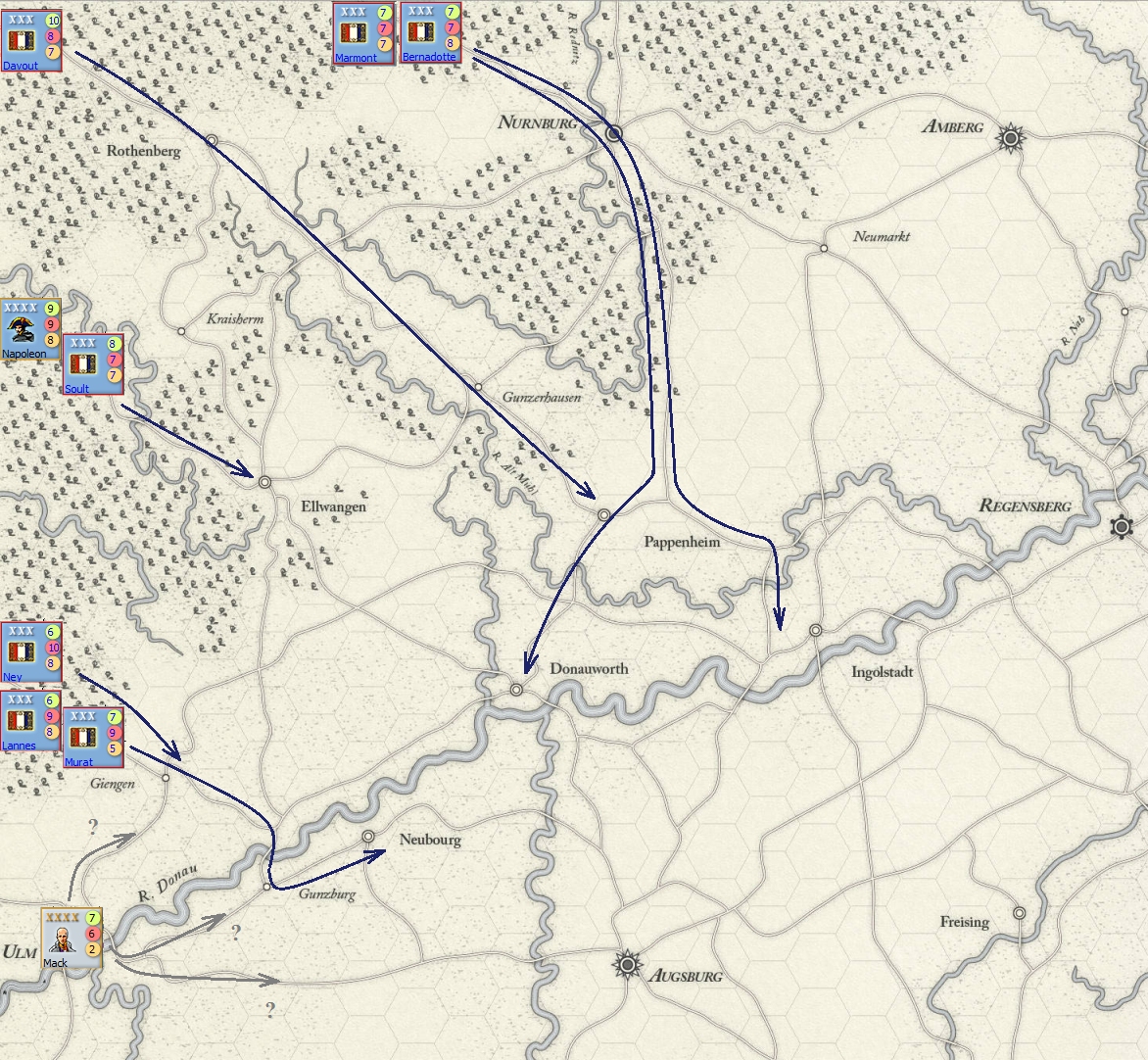 Bernadotte was directed through Nurnberg and then south to Ingolstadt. Marmont was to follow his corps and then swing south-westerly through Pappenheim to Donauworth. Davout moved on Pappenheim as a support for this left wing.

Soult was ordered to Ellwangen as a supporting element to the right wing. Lannes and Ney formed the right wing, being tasked with taking Giengen and crossing the Danube at Gunzburg. Murat was to march ahead and secure the Gunzburg bridge to cut the northernmost of the two roads to Augsburg that the Austrians might use.

It was not known if Mack would attempt to withdraw by the northern (Danube) road, the direct road to Augsburg, or even send some force north to attack Giengen.

By 4th October the French reserve cavalry corps, 14,500 sabres and 36 guns, commanded by Marechal Murat had crossed the Danube at Gunzburg with orders to move east on to Neubourg and ultimately Augsburg to close off the withdrawal routes of the Austrians, whom, it was learned at Imperial Headquarters, were in disarray and commencing an eastward retreat. However in the afternoon of the 4th enemy columns were seen moving smartly upon Gunzburg from the south west and Murat deployed his cavalry to cover the town and the river crossing. His patrols fed in numerous reports and it soon became clear this was the avantgarde of the Austrian army -

As the weaker force, our player team commanded the Austrians, tasked with throwing the French out of Gunzburg town and securing an open road to the east. I set up the SoWWL scenario using one of the Italian maps that is five miles square. This gave us some good open flat terrain broken only by crops and some woods with a large central town. I declared that the north map edge was the southern bank of the Danube. Note that this is why the map has Italian and not German place names! 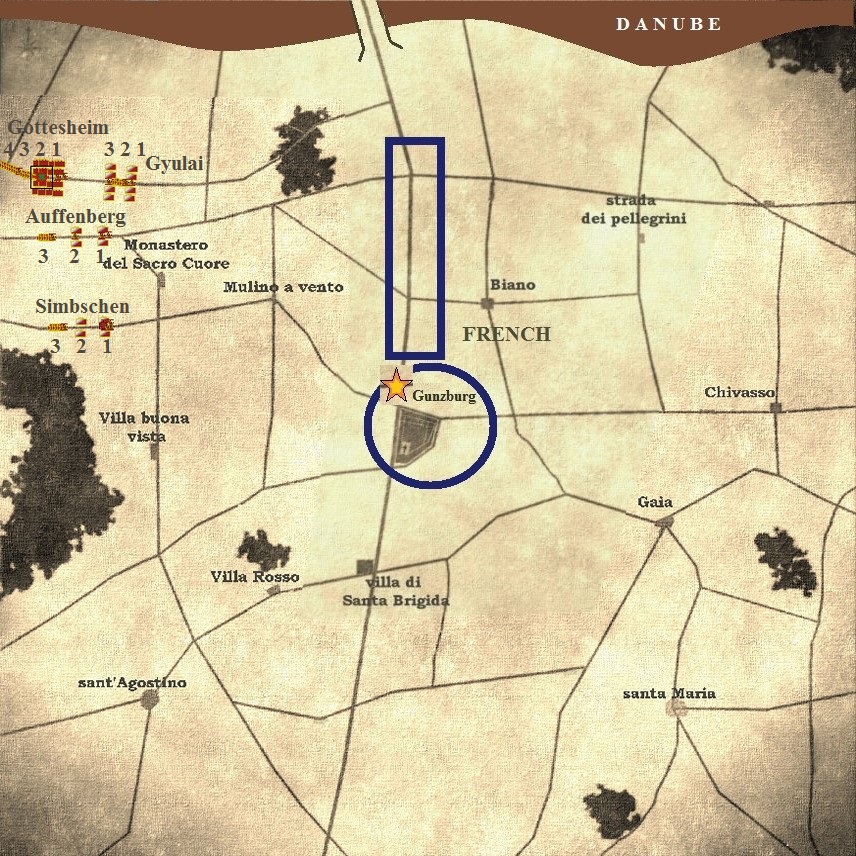 Our vaunted commander in chief, FML Werneck (Mike Morse), directed that Simbschen's cavalry would swing north across the line of advance of the other divisions to probe north-east towards the bridge. Auffenberg (me) and Gyulai (Kevin) would form the main attack force advancing south-east towards Gunzburg. Gottesheim's infantry division was commanded by Miko with the other Mike (Grog) as a subordinate leading one of the brigades. They were initially tasked with following up the cavalry advance to be ready to move in as needed.

Gyulai encountered French cuirassiers to the north and Auffenberg also met a body of enemy heavy cavalry NW of Gunzburg. In the north, with 8 regiments, Gyulai felt able to resolve the issue with a charge which was performed with the utmost dash and gallantry, the enemy being sent flying. In the south I, as Auffenberg, was more cautious. I had only 4 regiments and my enemy was partly concealed in vineyards atop a low hill. I therefore brought up my cavalry battery which went to work. 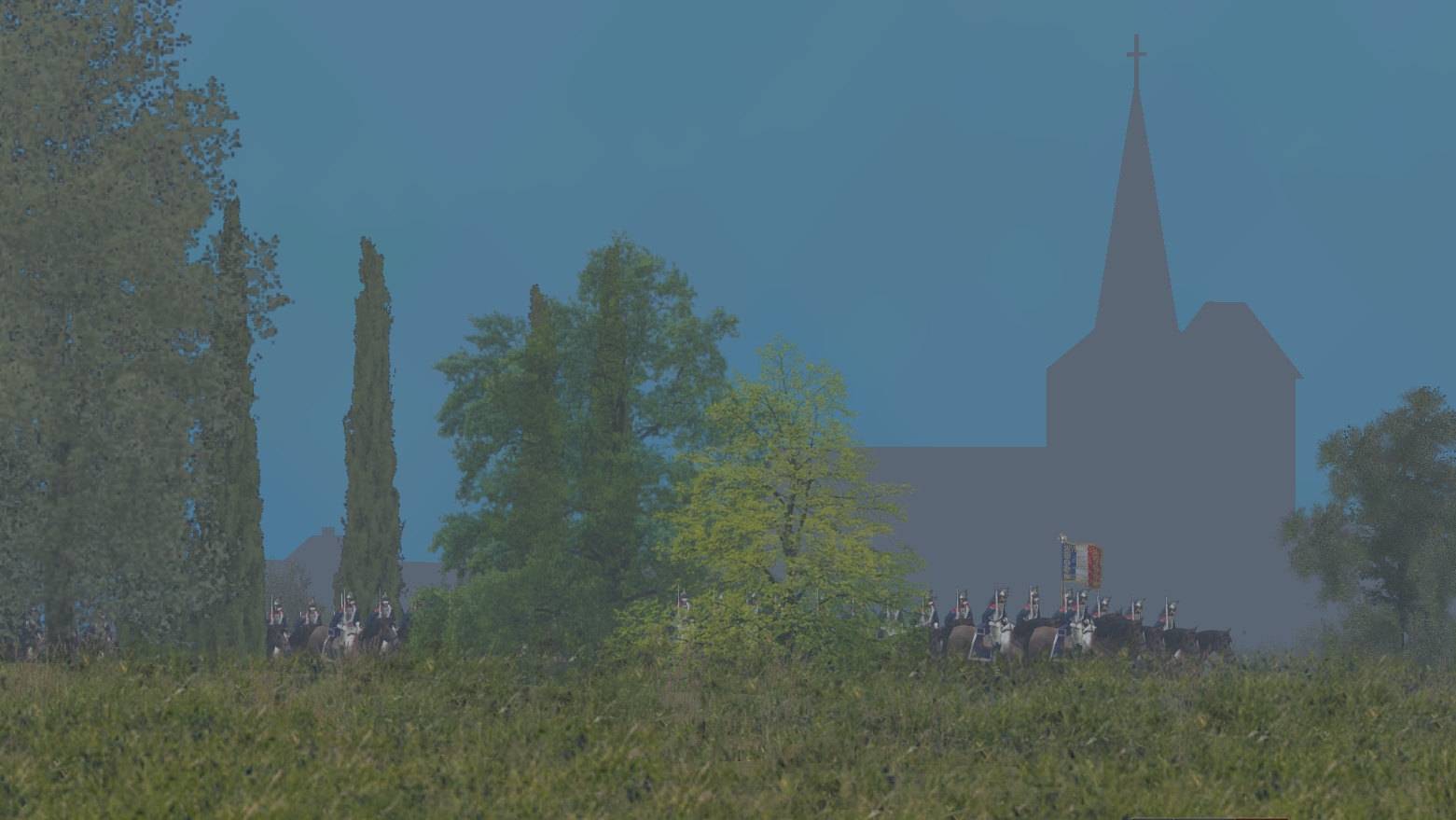 In the above image you can see Gyulai's division in the background moving forwards. 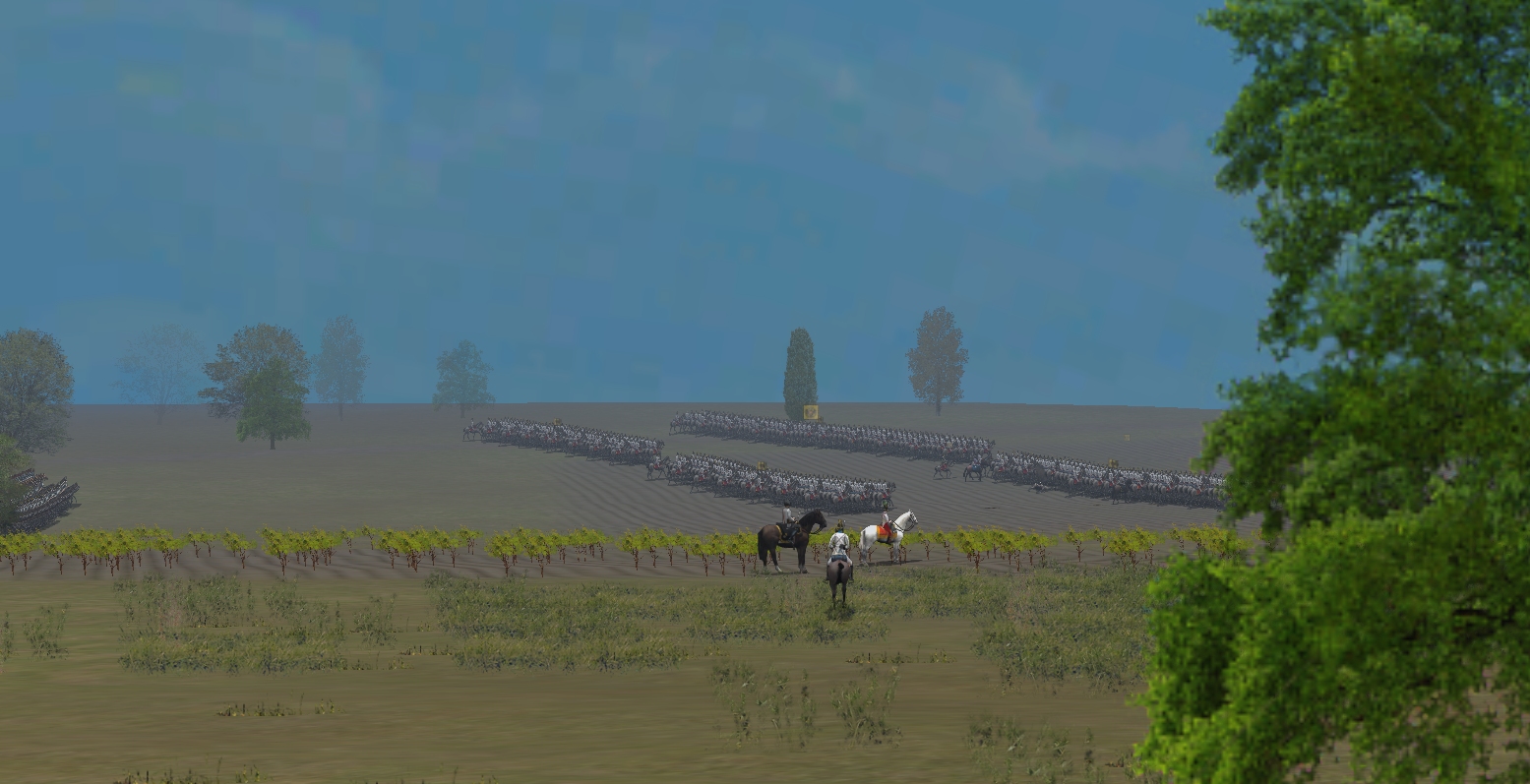 Kevin's cavalry charge was a magnificent sight to watch - just like the Charge of the Light Brigade. We rarely deploy this much cavalry in our online games, nor use it en-masse.