It has been estimated that 3 million rounds of small arms ammo were fired. These outnumbered the artillery by at least 100 times.

As to noise, tens of thousands of veterans put in claims for deafness after the war.

Suddenly there burst upon the air the sound of that terrific cannonading that preceded Pickett's charge. The earth quaked. The tremendous volume of sound volleyed and rolled across the intervening hills. “The grand roar of the whole artillery of both armies burst in on the silence as suddenly as the full and blasting notes of a pipe organ filling a church,” Sgt. George T. Patten (6th, Co. B) notes in his pocket journal. Patten was on the east cavalry Field at the time.

The cannonading three miles away was so fierce and heavy that he could feel the ground shake beneath his feet, and he had all he could do to keep his horse under control. From his vantage point it was possible to see every disposition of the enemy in one’s front, and it was clear that the cannonade came from the main field of the battle. 150 Confederate guns pelted Union positions with up to 300 rounds per minute as Union crews fired back with approximately 100 of their own weapons — for two hours — between 25,000 and 30,000 rounds.


It is unusual to find three or more casualties inflicted by a single artillery round, but occasionally an optimal detonation of a shell, case shot or canister round could simultaneously bring down several men.

Both armies used a particularly dangerous artillery technique known as “overhead supporting fire”, which entailed firing over the heads of their own advancing forces in order to weaken static enemy defenses prior to an assault. . At Little Round Top, the 5th Texas Infantry suffered casualties from their own cannon fire due to incorrectly sighted guns. This is not to say that the Confederate artillerymen were inferior to their Federal counterparts. At the battery level Union artillery was better organized on the whole by type in six gun batteries. Confederate artillery units were organized in four or six gun batteries in which types of guns were often mixed, leading to supply problems and inconsistency in rates of fire and range. Union batteries also had better quality ammunition and gunpowder supplies.

From the Quroa Newsletter
Baylor 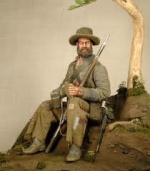 Interesting stuff, thanks. The debate over the relative effectiveness of small-arms versus artillery started during the war, and is still ongoing.

That's also linked to how the guns were organised. In the AoP, a large artillery reserve was formed midway through the war under Henry Hunt. Hunt had his successes, but Grant had very different views, and effectively broke up the reserve in all but name.