For those who are interested in using a 3D enviroenment to play favorite gameboard style games.
TableTopSimulator by Berzerk Games currently available on Steam is a great environment to
create Kriegspiel style games.
it can be an MP style game where two or more players can join with voice chat
or a group can buy the game and have one player be the referee as in the military training game.
The TTS editor can help build any game pieces you like, boards , cards as well as some automation.

Currently there are several Black Powder, Napoleonic, Civil War titles produced
You can also produce your own in 2D and 3D cards, figurines, using a variety of tabletop rules,
Dice rollers etc.
The game comes with a set of classic table games, and the Steam Workshop has all the
other games built by the community, Dungeon & Dragons, RPG style and lots of other games.

Thanks for posting. Someone else mentioned this app recently, and it does sound interesting.

If anyone has already used this for a k/spiel type game, could they please post some details, ideally with screenshots too.

I think this is something the group could investigate for KS format games where people are unable to attend the real face-to-face UK games near Aylesbury. I will grab the software and look into it.

Well, I've had a look and I think it has no value for us!

Mr Martin was looking for some sample images.
The first one is from my server on Steam. I haven't published these on the workshop.
Two Fat Lardies kriegspiel maps might be coming next as soon as I purchase the originals.
All images are saved to cloud and are featured on a stretch table, a table that can stretch to any size.
The game uses a specific set of rules, but any rules any scale...as you like it
We are using cards, but virtual miniatures can work as well if you can work with Blender or any such like program.
PDF and sounds or music can be imported directly, and there is a ton of free mods in the Steam workshop. Thank you for that zu Pferd. I apologise for my dismissive post. None of that was obvious from the links I followed and pages I read.

Would this be playable by three teams? Say 2 players per side who can only see their own map and 3 umpires who can see all 3 maps, or a master map that includes all the markers on the player maps? If that set up can be achieved I think we as a group should attempt a digital version of a face to face Kriegspiel.

Hello Mr Digby,
no problem, mine was to figure out how to add images to the post.
Up to six players can participate. 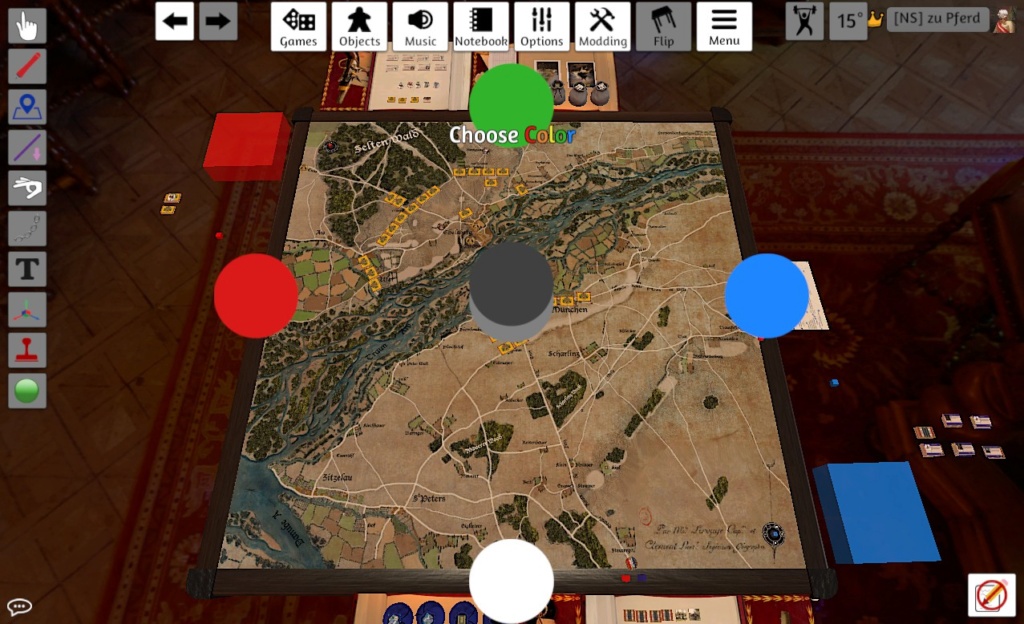 each color coded. The host player gathers all elements that go into building a game, he is the 'game host' from that moment
on in the game:
he can give or deny certain level of permission to all players such as, peeking (card games and boardgame pieces)
as in your case deny the permission to other players , but the owner to check other players maps, hands, cards.
A hexagon grid or square grid can be over imposed.

The 'host' doesn't have to be in play he could set up the board for each turn (turns can be saved individually)
I am at a loss if you can bring an observer(s) over the six positions, I'll have to check on that.*
* light gray and dark gray are umpire slots/positions*
Colored Fog of war areas can be built, as well as Fog of War areas on the map itself or the entire central map area inside
a box : if I understood your description: say belonging to grey and dark grey (umpires) but you'll be left with only
4 positions to fill.
*The maximum number of position colors are 8 +2 umpires (they can see everything)*

If you go back to the first pic you can see two colored boxes, one slightly transparent (belonging to the owner player)
the other little motif side tables are just 'locked'in place against the table, these areas can also have their own visual
blocking colored box.

I've used tabletop simulator for a lot of model wargaming, it's pretty great, would be fully up for this. There's some Napoleonic rules I want to check out that I've seen around 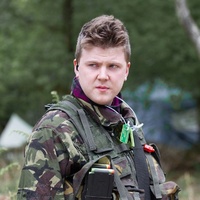 This is fantastic looking stuff, especially the maps!

I had always wondered what the tabletop simulator could do, and will now investigate over the Winter. Those who subscribe to Steam should add the TS to their wishlist, and will then find it is frequently offered at a large discount.

Anybody running a TS based KS, please let me know.

King Rufus. I'd be very interested in investigating this further as a vehicle to bring the face-to-face kriegspielers together who cannot travel to the Little Gaddesden venue as often as they'd like. We could arrange a Discord meeting date to discuss and see what the possibilities are. The potential seems limitless.

Good luck, gentlemen. This seems a most laudable objective.

Long time no see, hope all is well in your neck of the woods.

Yes we can definitely put heads together on this one, though I anticipate slow progress until Xmas, when I might have more time to spend on it.

I have oodles of spare time these days so as you seem the busiest of us, perhaps you could drop me an e-mail or a forum PM when you think you'll have some time to talk about this. If anyone else is interested a few heads will probably be better than two.

I can actually see where this could work really well for things I do related to my work. I have been wanting to use a multiplayer approach at an operational and tactical level as a way to help students prepare for leadership staff rides at places like Antietam. So I would enjoy adding in my thoughts to this. Never used this type of tool-approach before. Willing to look closer at it.

That's great, Pat. We'll add you to the test/discussion group.

Yes, I am afraid a small matter beginning with B***** has been keeping me well occupied lately!!

A little update for you chaps
worked out a way to get that old NWT graphics into the table. Its a work in progress, the lion share goes to the artist who has created and modified the units.

1.300 scale in the pic  but the whole base is scalable. I have one map published in TTS
Ebelsberg with a nice 1800 century map I might add, one of six (pending)

Any way I'll update again here is the model, a little dark but no ambient light applied to the
table.
Cheers