I have an original ORIGINAL - KRIEGSSPIEL - Reisswitz 1824 for selling.

WITH CERTIFICATE OF AUTHENTICITY!

Berlin, (Trowitzsch), 1824 XII, 59 + (3) pages, 4 folded copperengravings, 3 of them coloured. Contemporary interim Cardboard-binding with blue varnish. Slightly marked by the storage (original wrappers scratched), spine is splitted. Bookblock uncut and unopened, partially stained. Wide margins. The copy is from the posession of the austrian General Eduard count Clam-Gallas (1805-1891) with the mark of his library "Bibliotheca Smecnensis" on the title, 31 × 22 cm. FIRST EDITION of the manual for the first wargame, which was designed in order to depict and analyze strategic and tactical methods. The game was recommended for the education of prussian officers by prince Wilhelm I, the later emperor, and spread quickly. Especially General of Müffling made a strong effort for the game. In 1828 Moltke even founded a society dedicated to the game following the Reisswitz rules in Berlin. The training with the wargame advanced to an essential backbone of the education of prussian officers during the nineteenth century. Prussia probably owed its military successes to some extent to this game. So after the victory of Prussia over France 1870/71 armies all over the world started to integrate the game in their training. Philipp von Hilgers calls the game "the mother of all wargames". The principle set by Reisswitz, to split arbitrary runs of events and to process the elements one after another (you could say pseudoparallel), builds a basic principle of digital Data-processing. Reisswitz split the run of events in time units, allowed only written communication between the players and thereby achieved thriftiness and standardization of communication. Such manuals naturally are extremely rare, because most were destroyed by continuous use. 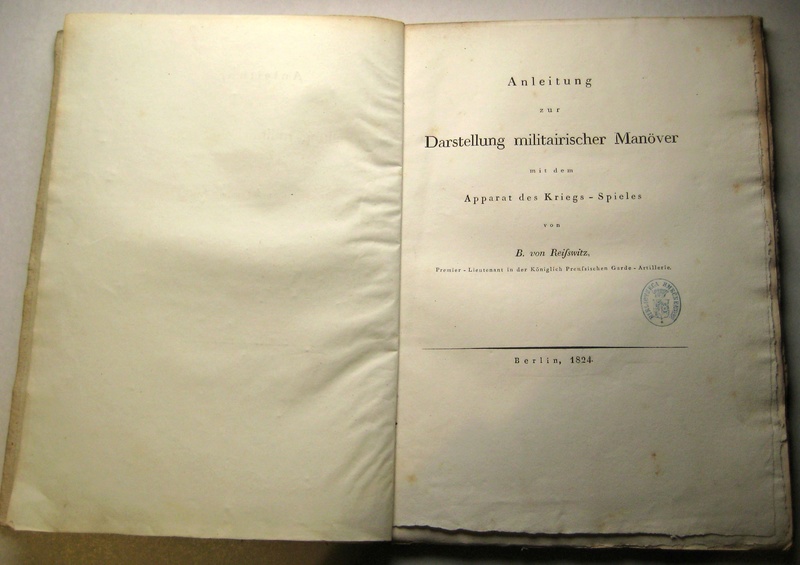